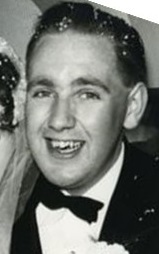 Mel was born on Feb 16, 1935 in Dundee, Scotland and emigrated to Canada as a young man. The love of his life, Helen Glen, followed him shortly and they were married on April 19, 1958 in Toronto. They enjoyed over 50 years together before her death in 2013.  Mel was trained as a Tool and Die Maker, and then became a Draftsman, working for many years in Toronto and then moving to the Montreal area in the fall of 1967 to a small, idyllic town called Beloeil. He was very active in his church throughout his life – teaching Sunday School, serving on the Admin Board, organizing Bazaars and other fundraisers etc. He served as a Cub Scout leader for many years, known affectionately as Baloo the SlothBear, who was a teacher of cubs of the wolfpack in the JungleBook story – a most fitting title. He taught his kids so much about love, generosity, servant leadership and managing our finances (he would argue that he was “Thrifty” but not “Cheap”).

Mel and Helen also enjoyed Square Dancing for many years, with Helen often making them matching outfits (to the embarrassment of at least one of their sons!). They had 4 children together, and were the best parents that anyone could hope for! They loved vacationing at a trailer park in Plattsburgh, NY and travelling to visit their family in places such as Dallas, TX; Toronto, ON; Seattle, WA and Providence, RI, as well as a few trips home to Scotland.

Mel was someone who would do anything for anyone – and kept busy after retirement driving elderly people to their doctor appointments – he even had to arrange a substitute when he was going on vacation. In his later years, Mel moved into an assisted living facility where the staff were wonderful to him – and he especially enjoyed the home cooking. Mel will be greatly missed by his many friends and family.